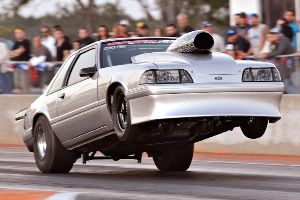 Corey started Justin out earlier this year in a detuned N/A 5.20 capable car and within a handful of passes he was in the 5.20’s looking like a seasoned veteran. Anyone that’s driven a car that quick knows how much of an adjustment that is starting from scratch, and yeah, we’re certainly impressed! Not only is Justin a quick learner, he’s also deadly on the tree cutting lights in the .007 to .011 range! Corey attributes Justin’s quick reflexes to his experience on the Football field where he plays Quarterback and those quick reflexes have been painful lessons to his competition. Corey said a number of the older guys ask him to “Go easy on me…” before suiting up as they know they had better be on their toes or Justin will tree them bad. And so far Justin has never been treed in competition…

Justin has already been taught a tough lesson with a wild ride ending up with the tail of the car hitting the wall at the top end of the track which definitely got his attention. Afterwards he took a few months off before he decided he was ready to drive again. His Dad insisted he go right back to the same track where he had wrecked at if he was going to do it, and that’s what they did. They went right back to the slick track that he had wrecked at, and once again it was a challenge to get down but Justin did it. If you’ve ever kissed the wall in a car, you know it’ll teach you a newfound respect for these wicked beasts, and it appears Justin’s learned his lesson well his Dad says.

He’s now behind the wheel of Skywalker, the evil silver Mustang that Corey bought from Eric McMillon (Speed-365.com) earlier this year. The car is powered by a SC1 Headed Small Block Ford built by Seidle Racing Engines and is equipped with a Neal Chance bolt together converter, in fact Corey runs NCRC in both of his Mustangs. Skywalker has been 4.71 at Holly Springs, and just recently went 4.729 in testing in Georgia making it the fastest Small Block X275 car in the country. Their orange car has been a 4.83 recently, making it the second fastest Nitrous Small Block X275 car – and yes, they both were in 2013 rules trim. Their team, Fat Boy’s Racing, are going to be tough to beat this upcoming season!