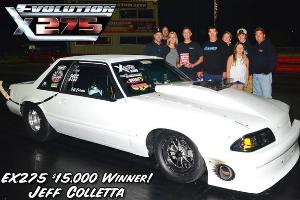 Jeff qualified #7 with a 4.6469@150.20 and made it through some tough competition to get to that final. His Nitrous equipped Big Block Chevy powered Mustang is equipped with a Neal Chance Converter and Proformance Racing Transmission 2 speed 400 with the fast reacting Billet Aluminum Valve Body.