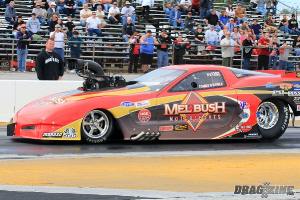 Tommy D’ Aprile and Mel Bush Motorsports started off their 2014 Season with a win at the U.S. Street Nationals in Bradenton January 26th. D’ Aprile edged out Anthony DiSomma driving Saud Alzabin’s Desert Demon’s Mustang in a close “All NCRC” Blower vs. Turbo final round. D’Aprile ran a 3.702@206.61 to Disomma’s very close 3.732@209.83.

This race was the first time out for the Desert Demon’s Mustang owned by Saud Alzabin. Engine builder and driver Anthony DiSomma really made the Turbo Powered Hemi hit the mark right off the gate along with help from the Bruder Brothers, Joe Lepone Jr., . You really can’t expect much more to go to the finals on a brand new car, very impressive guys! 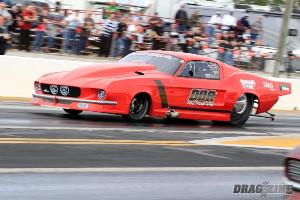 Saud’s Mustang runs the Neal Chance Lightweight NXS BB with Titanium Option (YES we do Turbos Too!) which was spooling in under 3 seconds with this big Hemi Turbo with twin 91’s.

Congratulations to Tommy & Mel Bush Motorsports on their win, and Anthony Disomma, Saud Alzabin and the Desert Demons Team on their Runner Up!

We also want to congratulate Todd Tutterow who also runnered up in Outlaw Pro Mod!