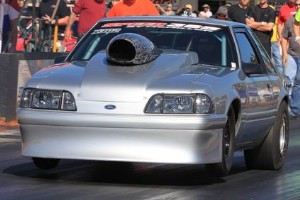 Justin Swanstrom captured his second X275 win of the season at the US Nationals in Bradenton on January 27th. The Fat Boy Racing Team qualified #2 with a impressive 4.751@150.50 and ran a consistently fast pace every round. They met up with Scotty Guadagno in the final who was driving the Mustang of Eugene Rodriguez at this race. Both cars slowed in this round, but Justin still came out on top once again running a 4.870@148.09 to Guadagno’s 4.946@143.33.

That makes for a great back to back win after the Tomato Nationals earlier this year. The Father & Son Team has been making all the right calls and taking that Silver Mustang to the winners circle. We’re looking forward to seeing how the team does at SGMP very soon!

Congratulations to Justin & Corey on your second win of the season – keep it up guys!!