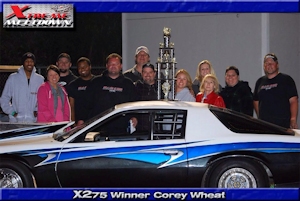 Corey Wheat took his 1st win in X275 April 20th at Houston Motorsports Park’s Xtreme Meltdown behind the wheel of Jason Michalak’s Camaro. Wheat made steady progress on his tune up in qualifying and through eliminations which took him to the final round against Trevor Stripling.

In the final round of eliminations, Wheat laid down a great 4.7197@152.23 pass and in the other lane Stripling broke resulting in a way off pace 15 second pass.