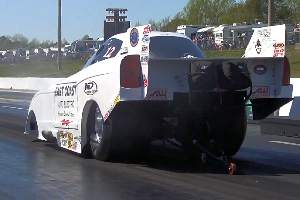 John Anderika for the 2nd race in a row qualified #1 and went to the finals at the NHRA Race in Norwalk. He went a 5.632@255.63 MPH during qualifying, but dropped a valve in the process. The team put their back up engine in and made it all the way to the finals against Chris Foster. They gave it a good try but came up short with a 5.72 vs Foster’s 5.65 in the final round.

We’re CERTAIN there’s a Wally coming soon to John’s Trophy Shelf, it’s just a matter of time and this team is going to get there soon!

Congrat’s on the Runner Up John, Frank and the entire East Coast Auto Electric Team !!