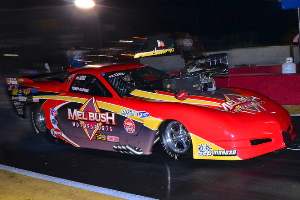 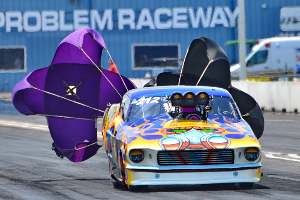 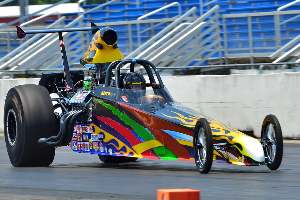 PRO EXTREME – Tommy D’Aprile scored his 1st XDRL Pro Extreme Win in Belle Rose. D’Aprile wheeled his Mel Bush Motorsports Sponsored Corvette to a 4.673@207.23 in his final round victory over Quain Stott who stopped the clocks at 3.749@202.18. It’s the fourth win for Tommy this season, looks like he’s off to a pretty good season!

Tommy has dedicated his win to the memory of Elizabeth Landry, wife of friend and crew member Melvin Landry. Elizabeth recently passed away from cancer.

Congratulations Tommy on your first XDRL win, and our condolences to Elizabeth’s friends and family.

Also in Pro Extreme we want to congratulation Frankie Taylor who set the XDRL Pro Extreme Record of 3.64 at this race! Frankie ran a slew of 3.60’s, he has that Hot Rod running good!

X-TREME PRO MOD – T.J. Tindle also scored his first XDRL win in a all NRC final Round against Kevin Rivenbark. TJ ran a 3.992@186.54 and won on a holeshot over Rivenbark who ran a quicker 3.964. This way’s TJ’s first win in Pro Mod, so that made it extra special.

Congratulations TJ on your win and to Kevin on the Runner Up!!!

Congratulations Todd on your win and to Mike on the Runner Up!!!

TOP DRAGSTER – Keith Reftery took his Top Dragster to the winners circle at Belle Rose on a bye run after his competitor Laramie Ried crashed in the previous round. Not the way any of us want to take a win… Keith was running Top Sportsman as well at this race and made it to the semifinals in that class as well.

Congrat’s Keith on your first X-DRL Win and also on your NHRA Enis Division 4 race a few weeks ago!

We would like to congratulation Bob Gulitti who was the #1 Qualifer in Top Sportsman. Bob collected a $1500 bonus for his 4.137 pass!