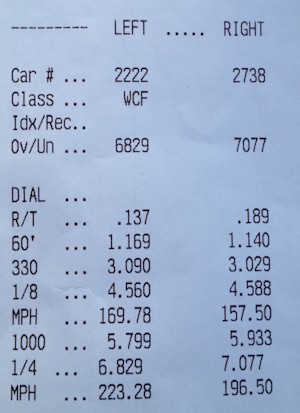 Mark Carlyle 1st broke the LSX Drag Radial and Stock Suspension Corvette records when he ran a 7.09@212, on that pass he also went a 4.74 660′ – that was back in the first of October. He then broke into the 6 second zone a few weeks later at the LSX Shootout where he went 6.99@209, the first to break the six second barrier in the LSX Drag Radial Class.

There are a lot of guys that would call it as season right there shutting it down on a high note, put the car up on jackstands and enjoy a few months off,but not Mark! Next stop, the World Cup Race at MIR where Mark qualified #1 blasting away their own record with a 6.829@223.28 in the 2nd round of qualifying. He then backed it up in the 4th round with a 6.89@221!!!

Carlyle made it all the way to the finals but experieinced some breakage unfortunately but he still runnered up and laid waste to his previous record. He now solidly holds the World’s Quickest and Fastest IRS equipped car!!! But wait, there’s more… We hear Mark’s repairing the damage from MIR and is on his way to Vegas for the Street Car Supernationals – this season ain’t over yet, not when you’re Mark Carlyle!!! We can’t wait to hear the results from that race.

Congratulations Mark, IPS Motorsports and Team on your new records and the R/U finish!!!