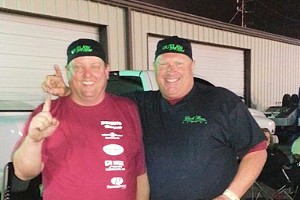 Eric, driver of the Clark Brothers Racing Team, qualified #1 with a 3.99, went a 3.98 in the first round and runnered up in the final which put him solidly in the points lead by two points to win the 2012 Championship! During that process they also broke the record twice at only 17% over and above min weight too boot!

Congratulations to Eric, Scott and Team on the new Record and TAO Championship!