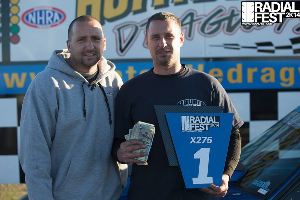 When a cold front pushed down last weekend over two drag radial races at Tulsa Raceway Park and Huntsville Dragway, everyone knew records were certain to fall, and they most certainly did. While some impressive times were put down at Tulsa in the killer mineshaft air, Huntsville was the location for new records in both Radial Vs. The World and X275 classes that will likely hold until 2015.

The Bruder’s got to make the long pull home loaded up with a nice $5k bundle of cash, a fancy trophy and the World Record, you can’t beat that! 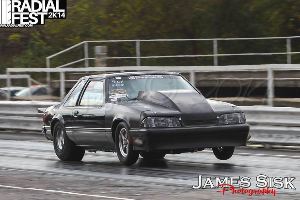 Even more impressive is this team did it with a single solenoid plate! Yeah, that’s right, a Wizard’s of NOS PLATE which proves there are still gains to be had in the N2O world. Jack runs our 10″ Billet Aluminum NXS X275 Converter in his N2O powered beast and you’d have to say it’s working in that car!

Congratulations Greg, Jack, Kevin Neal and Trevor Langfield on a new first in the Nitrous World and a new X275 Record for N2O power! 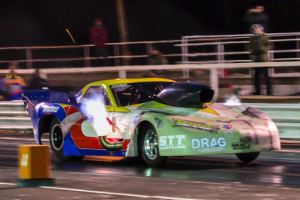 Jamie was on a record breaking pass in the finals against Brad Edwards in a race to be the 1st to the 3’s, but luck wasn’t on his side. He went a .996 60′ which looked to be a record breaking run, but unfortunately the car broke loose down track and he got into the wall. Edwards did break into the 3’s with a 3.99@193, but you can bet Hancock will be back next season looking to break that record!

Congratulations to Jamie and the Hancock Racing Team on the new N2O RVW Record and a great season of racing!!!

We also want to give a shout out to Chris Swain who was running the Radial Revenge Race at Tulsa. Swain went 4.669@153.75, likely the quickest pass ever for Large Frame 85mm Turbo in X275. Way to go Chris!!