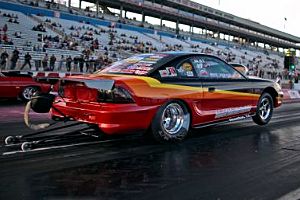 NMCA & NMRA Racer Mike DeMayo made the long pull West once again for the 8th Annual Street Car Super Nationals in Vegas to compete in the N/A Hot Street Class. Mike qualified #2 with a 8.212 and laid down the fastest pass in qualifying with a blistering 169.13 (39 mph backhalf) during one pass which dropped a few jaws!

Despite a lot of work to eek out a few more hundredths, DeMayo’s colorful Mustang decided it wanted to be a bracket car laying down passes in the 8.20’s repeatedly. That was plenty quick enough, combined with some good lights make his way through the ladder although he did ran a best of 8.193@163.28 during the second round win over Alguireto. In the final Mike defeated Victor Brum with a 8.211@162.20 to Victor’s 8.226@163.64 allowing him to take home his 4th SCSN Hot Street Championship. That’s a nice way to cap off a darn good season where he had also won 2 out of 3 N/A races.