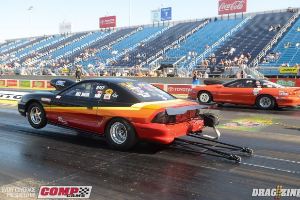 Mike DeMayo made a clean sweep at the NMCA/NMRA Superbowl in Joliet July 13th where he won both the Naturally Aspirated 10.5 class and the NMRA vs. NMCA Super Bowl battle!!

DeMayo started at the bottom of the ladder because he broke his motor and didn’t get a qualifying run in. After switching engines in time for eliminations, he defeated the #1 qualifier Judson Massingill 8.055 to 8.122. An interesting note that Demayo matched the clutch cars MPH, both running 168.

In the NMRA vs. NMCA Super Bowl round, Mike defeated Factory Stock winner Matt Amrine despite nearly a 4 second advantage. DeMayo ran 8.01 to Amrine’s 10.96 for the win and the ring.

Congratulations Mike and Team Powerhead on both wins!!!

We also want to congratulate Andy Manson on his Runner Up finish in Street Outlaw. Andy went red .004 passed the win to Phil Smith in a very close 7.10 to 7.11 final.

And last but not least congrat’s to James Lawrence and the BlownZ Team who qualified #1 with a 7.34, broke the 200 MPH barrier with a 7.169@200.56 blast in eliminations. James says his driveshaft RPM showed 196-197, but hey he’s got the winners time slip with the number!