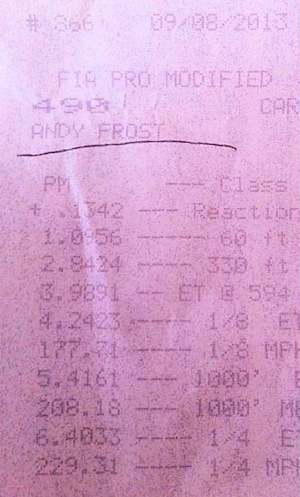 Andy Frost behind the wheel of his Red Victor 3 raised the bar once again during competition at Santa Pod Raceway September 8th at the 2013 FIA European Finals. Frost laid down not one, but two passes in the 6.40’s with the best run recording a 6.4033@229.31!!!

That’s flat hauling the mail in a street legal, and street driven car, no matter which side of the pond you’re on!

Due to a timing system glitch, eliminations didn’t go well but we’re certain Andy and Red Victor will be back out very soon and we’re going to see a pass in the 6.30’s before years end!