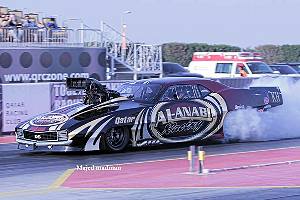 Alex Hossler has massive points lead in the Arabian Drag Racing League after winning Round 5 of Pro Extreme. This win marks his third victory in Qatar, he also recorded low ET and set a new ADRL MPH record of 217.00 MPH at this event during qualifying.

The familiar Al-Anabi Camaro driven by Hossler qualified #1 with a 3.539 and faced fellow NCRC equipped Von Smith in the “All NCRC” final round. Smith went red, and Hossler – who was loaded for bear, laid down his fastest pass of the race, 3.527@215.79 MPH!

Congratulations on the win and breaking the record Alex, Billy and the Al-Anabi Team! Also congrat’s on the R/U to Von Smith and Team!

The Qatar Racing Club has a Stunning YouTube Video of the Race Highlights, make sure to watch full screen in HD!