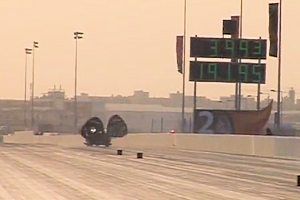 Todd Tutterow blasted out a 3.993@191.95 driving the Al-Anabi Outlaw 10.5 Corvette in Qatar during testing on January 14th. While some won’t give him credit as it was during testing, and there were not certified pictures of the scales to prove he was at race weight, it was still the 1st pass by an Outlaw 10.5 car in the 3.90’s.

Todd went on to win the 1st event over Tim Lynch setting the stage for an exciting battle for the next race in the series!