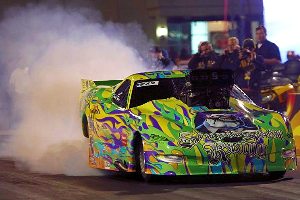 Frankie Taylor AKA “Mad Man” broke all records in Pro Extreme at the Arabian Drag Racing Leagues Race in Qatar January 19th. Taylor laid down and unprecedented 214.42 MPH during his second qualifier along with a 3.563, backed up by his previous qualifying pass of 3.580@213.16!

Joey “Hero” Martin & Taylor faced up in the final round for an “All NCRC” slugfest. Martin’s wheelie bar broke ending what would have been a close race. Martin had laid down a 3.624@209.14 during testing later, proving that the White Camaro will lay down the big numbers.

Big Congratulations to Frankie on the win and new World Records and to Joey on the R/U!