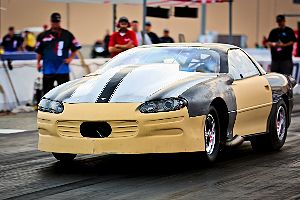 James Lawrence, President at Power Automedia (The Dragzine Guys), broke in their Project Blown Z 2.0 during the NMCA West Season Opener at Auto Club Dragway with some good results. After a total revamp of the entire car last winter, including a new NCRC NXS Billet Converter, and a very mean LSX Late Model Engines Built LS-R headed F1X powerplant the Powermedia team qualified #5 with a 8.56.

They got their first round win defeating Ryan Jones which a much improved 7.52@190 but problems occured putting the car in the sand trap requiring some repairs after having problems in round 2. You can bet they’ll get Mr. Blown Z fixed up and he’ll be back out looking all fancy with a new wrap at the next race at NMCA Street Outlaws Race in Pomona.

Congrat’s on getting the updates all wrapped up and a first round win James & The Powermedia Team!