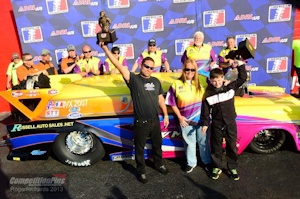 We’ve got some great news to share after the results of the ADRL Dragpalooza IX Season Opener at Rockingham Dragway March 10th.

The late Toney Russell would have been very proud to see Joey Martin put the LowMad back in the winner’s circle once again at The Rock, and we’re sure the new team owner David Elsberry was quite happy as well!!

Martin certainly put the hurt on his competition at the ADRL season opener with hole shot victories on both Jason Scruggs in the 1st round and #1 Qualifier Von Smith in the 2nd Round. In the Semi’s Martin defeated Richard Holt with a 3.677@205.98 which put him in the final round with Mick Snyder. In the final Snyder redlighted giving Martin an clear victory and the LowMad teams 1st victory in ADRL for the 2013 season.

Congratulations to Joey, David and the LowMad Team!!!! 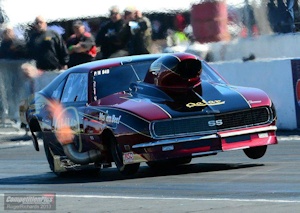 Stevie “Fast” Jackson qualified #1 with a 3.782@196.04 and went to the winners circle in Pro Nitrous driving the Al-Anabi Camaro. Jackson was the fastest of every round in both qualifying and eliminations which helped him defeat his teammate Mike Castellana with a 3.771@196.50 over Catellana’s 3.813@197.48. Jackson got up to speed very fast in Pro Nitrous winning his 1st ADRL race in the US with a solid performance with a 5th round race win earlier this year in Qatar.

We’re especially proud of this win here at NCRC as this marks the 2nd race win in a row using the new Lockup Converter!!! As with any new technology there is a learning curve, not only for the manufacturers but for the Racers implementing it – so we’re really pleased to see the Al-Anabi Team get up to speed so quickly…