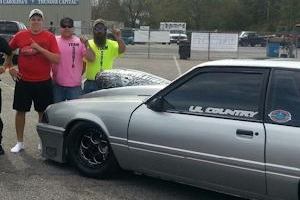 Carolina Dragway AKA “House of Hook” in Jackson, South Carolina put on a X275 & ODR race sponsored by Holcomb Motorsports March 15th which drew some of the teams from Florida to come after a great purse. Justin Swamstrom “Lil’ Country” and the Fat Boy’s Racing Team decided to double down and run both X275 and Outlaw Drag Radial, and it certainly paid off for them.

Justin qualified #5 in X275 with a 4.89 then locked Skywalker in with a 4.79 on the dials. That certainly worked with consistent 4.79’s in eliminations when many of the other cars were blowing the tires off. They turned it up a couple notches for the final and sprang a 4.75 to win the race over Nick Yarber who ran a 4.78 and was also able to go to the semi’s in ODR. That’s a lot of hustling between rounds turning the car around, but it certainly paid off for them with a $6000 check to take home to Florida!

Congratulations to Justin, Corey and the Fat Boy’s Racing Team and another well deserved win!