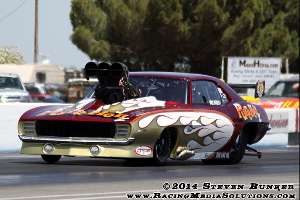 West Coast Outlaw Pro Mod Series Champion Marc Meadors Goodguys Racing Team got out for their first race of the 2014 Season last weekend. Marc qualifed “Pure Hell”, the Team’s 69 Camaro, in the #1 Position, but luck not ET propelled them to the Winners Circle. During his 5.831@254.09 qualifying run, Marc lost his passenger door but the Team luckily had a spare.

In eliminations, Pure Hell knocked the tires off, but luckily Rod Burbage in the other lane broke allowing Meadors to continue on to the next round. In the Semi’s against Troy Ferry, Pure Hell deceided to kill a crank sensor after launch, but luckly Ferry’s parachutes deployed early shutting him down and letting Meadors take another round win. In the finals they drew Mike Maggio, always a tough competitor, but this time both cars made full passes and Meadors took the win over Maggio, 5.921@249.62 to 6.026@248.39. Now that win was impressive over Maggio, but what’s also very impressive is those ET’s were recorded at 154° track temp!!

Team Goodguys Racing missed the 1st race of the season, but still with this win was able to move to #3 in the points regardless.

Congratulations on the healthy dose of good luck and the race win to Marc and the Goodguys Team – Jason Bunker, Billy Fereira, Ben Boylan and Greg Lee !!!