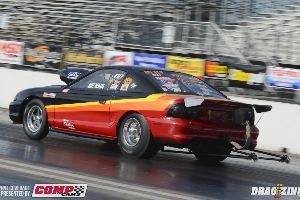 Mike DeMayo and Team Powerhead took home a big win at the NMCA Nationals in the N/A 10.5 right on the heels of his win at Atlanta where he recorded a new N/A 10.5 Record.

DeMayo wasn’t just fast, he had over a tenth on the next closest qualifier when he laid down a 8.002@169.87 to take the #1 position setting the stage for the rest of the event. In eliminations, he consistently recorded 8.00 passes en route to the finals where he took out Dwight Ausmus with an 8.05 to Ausmus’s 8.10.

Congratulations Team Powerhead on another win!!!