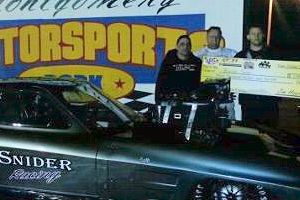 Brandon Snider has been virtually unstoppable in his JMRC built 63 Vette at Montgomery Motorsports Park’s Southern Outlaw Series. He’s won the last three races in a row despite some weird bugs the team has been dealing with.

The team recently suffered a driveshaft failure at the ADRL World Finals ending their advances early, and at the same time they discovered a fuel shutoff valve that was wanting to shut itself off going down track. That’s the kind of thing that can drive you nuts, we’re glad they finally caught it. You can bet they’ll get these issues sorted out and be even stronger when they come back out in 2013! What will this car do when the fuel is flowing all the way down track? You can bet it’s going to be quick!

Way to Go on the Three-Peat Brandon !!!!