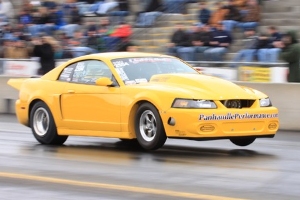 Terry Elam broke the Turbo Record in X275 last weekend at the Holly Springs Race where he laid down a 4.6406@155.17 during the 2nd round of qualifying, a new low ET for a Turbo car. Elam recently switched his car over to a Precision 88mm turbo just before the SGMP race, so that’s really impressive to go that quick on only the second time out with the new combination.

Unfortunately Terry was a little to quick in the first round on the tree and lost to Dan Schell, but you can bet you’ll see more of this car in 2013! Terry’s Mustang was built by Mike Duffy Race Cars, Trans by Hutch, an “old faithful” Neal Chance Converter and Small Block Ford power built by Panhandle Performance.

Congratulations on the New Record Terry!!!