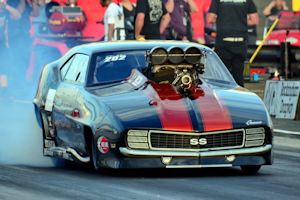 Todd “King Tut” Tutterow came up from behind to win the Pro Extreme class despite a less then stellar qualifying attempt which landed him #12, but those issues did not let the Team give up by no means, they kept at it and made it to the finals. Tutterow got a lucky break in the all NCRC final when Mustafa Buhumaid went -.084 red with a 3.587@216.06, Tutterow saw the red light and coasted to take the win light with a 4.636@111.85.

Buhumaid was running consistent 3.58’s during eliminations and would have been tough for Tutterow to outrun in the final if it wasn’t for the red light start.

Congratulations to King Tut and Team Galot on the win and to Mustafa on the R/U finish! We also want to give a shout out to Jason Scruggs who was #1 qualifier with a 3.54@217.42!

In the second round of eliminations of Pro Extreme, Jose Gonzalez in the Q80 Camaro ripped off a blistering 3.67 –227 MPH blast with the NCRC Billet Lockup! That’s a new MPH World Record, and a mighty impressive one at that! Jose got outran in the 3rd round by Todd Tutterow when they rain into problems and the car slowed, but certainly an impressive performance at this race! Congratulations guys! 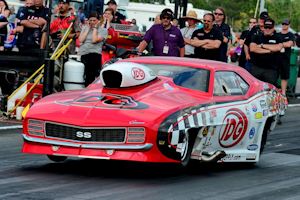 NHRA Pro Mod World Champion “Tricky” Rickie Smith got his teeth into PDRA competition big time with his win at Rockingham! Smith defeated defending Pro Nitrous Champion Jason Harris in an “All NCRC” final round. Smith reacted quicker and ran a 3.82@199.61 to Harris’s 3.812@199.05, but due to a slower light passed the win to Smith for the win, not bad for Smith who is more used to a clutch – we think he’s liking these converter cars about now!

Also in Pro Nitrous Stevie “Fast” Jackson set a new Pro Nitrous Record of 203.49 during qualifying, ran 203.34 in the 2nd Round of eliminations which should have backed it up for an official MPH record! Congratulations Jackson, Billy Stocklin and the rest of the Team on the new Pro Nitrous MPH Record! 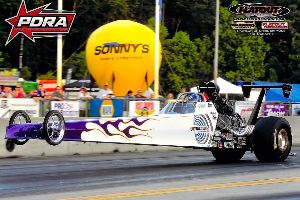 Phil Esz won the Pro Open Outlaw class, the first race for the new class which consists of Roots blown or Turbocharged dragsters or Altereds. Esz qualified #1 with a 3.64@202.67 then set Low ET and Top speed with a 3.62@204.32 setting the pace for the new class. In the finally he won by defeating Eddie Lykins with a 3.657@203.80 to Lykin’s DQ Red Light Start w/no Time.

Congratulations Phil on your win and performance!