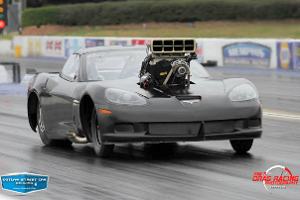 Despite crazy weather conditions of rain and even snow, the Outlaw Street Car Reunion at Memphis International Raceway raised the bar for Drag Radial Competition that much higher March 29th.

The Dream Team of Jason Michalak, Billy Stocklin and Frankie Taylor busted the Pro Drag Radial World Record on Sunday with a 3.97 in the first round of qualifying Saturday. After watching this team run 4.00 at Denton just a couple weeks ago, we all knew that pass was coming, it was just a matter of “when”!

Michalak was headed to the finals against Brad Edwards when rain forced the race to be canceled. That would have been an awesome race, but it’ll have to wait for next time. 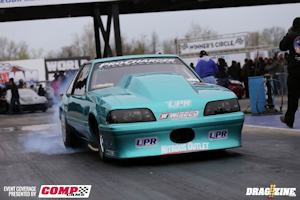 We also want to give a shot out to David Pearson who laid down a 4.12 on 275 radials at this event which proves that 4.11 in testing a couple weeks ago wasn’t a candy wrapper pass! Pearson qualified #4 in Pro Drag Radial on the little tire, and unfortunately spun in eliminations ending his day early. 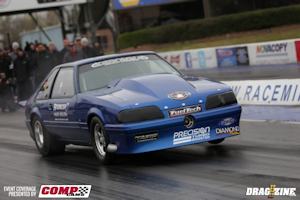 In X275, The Bruder Brothers were laying down dominate passes after qualifying #1 with a 4.469@167.22, the Brother’s were all prepared to take the win in a final round against Kit Loung, but also had to split due to rain. They were certainly on their game at this race!!

NMCA N/A 10.5 Racer Butch Kemp was there running Ultra Street in his Naturally Aspirated Mustang impressing the troops. Kemp qualified #2 with a 4.923@142 and later uncorked a 4.89 in the Semi’s against Joel Greathouse. That put him in the finals against Shawn Pevlor until the rain canceled the race.

It was good to see Butch at a Drag Radial race and super competitive as well!