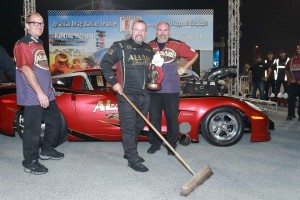 Todd Tutterow aka King Tut took home the championship for the 2013 Arabian Drag Racing League after winning all five races in Outlaw 10.5. Todd was driving the Al-Anabi Corvette which he qualified three times in the #1 position and set the low ET for each race, including an unofficial first pass into the 3 second zone (3.993) for a Outlaw 10.5 car!

He not only beat the Lynch Mob once, but 3 times during the race series denying them a chance at a victory at every race – not many can brag of doing that! In the last race Todd ran a 4.033 to Lynch’s 4.057 for the final round win for the race and championship.

Not only was Tutterow the fastest Outlaw 10.5 car there, but he was consistently very fast with many 4.0x passes. In addition to Todd’s amazing tuning abilities, we believe his new NXS Series Billet Converter helped play a part as well.

A big hearty congratulations to Todd, Brad, Scott and Al-Anabi Racing on a stunning victory!