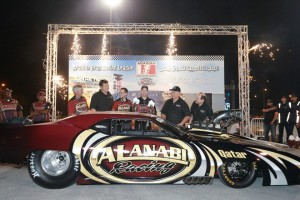 Alex Hossler took home the championship and secured a new world record at the Arabian Drag Racing League’s International Championships after round five, the fifth and final event in the series. Alex squeezed out fellow NCRC equipped Frankie Taylor for the points lead after winning the final round.

Hossler started off the final by qualifying #1 with a 3.553@214.01 which was very fast for the hotter and more humid conditions at this event, he backed showing it was no fluke when he ran a 3.557@213.40 in the last round of qualifying. He did not give his competition any slack during eliminations either, in the 1st round he outran Joey Martin in the Al-Anabi 69 Camaro which sealed the points lead over Taylor.

Unfortunately in the final against Mad Man Taylor, a broken transmission in Taylor’s car prevented what could have been a great final round, but Hossler did not coast for the win, instead he kept the pedal down and but down a 3.542@214.04 for the win.

This race series win also included him breaking the world Pro Extreme ET Record THREE TIMES and the MPH record once, that was no small feat and not one that will likely be reset anytime soon. The Al-Anabi team took home a reported $70,000 for their total race wins which was certainly a great pay day! Both Alex and Frankie were running the new NXS Billet Converter in their cars which is fast becoming the converter of choice in blown alcohol applications. 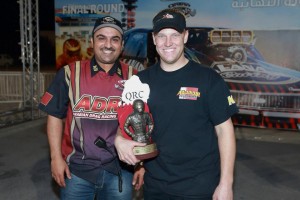 We also want to give a shout out to Stevie Jackson!

Billy Stocklin and Steve installed our new Lock Up Series converter in the Al-Anabi Pro Nitrous car and picked up a whopping 4 1/2 MPH and .06 ET right off the bat – that’s a healthy improvement for a first try on the combination! Jackson went on to lay down multiple 3.77’s @ 197.10 passes and took home the win in the 5th round over #1 qualifier Al-Zaabi.