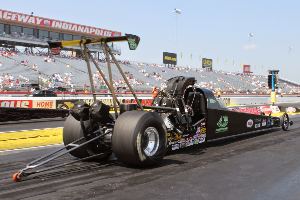 Booher qualified #2 with a 5.312@268.87 in round #2 after switching back to his Neal Chance Billet Converter. The Team blew up a Brand X Aluminum converter they were testing in the 1st round of qualifying (That wasn’t ours!), but got the converter swapped over to the NCRC unit without other damage to the car luckily.

In the Semi Finals the Booher Racing Team laid down their fastest ever pass with a 5.304@272 MPH! A new World Record for Converter Equipped TAD, and a new personal best pass! It went 217 MPH to the 660, picking up 55 MPH in the back half, which as Brandon remarks is “Otherworldly for a blown TAD” – we agree!!! An awesome pass, but wait it gets better – Brandon went on to the finals against Marty Thacker and took the win easily when Marty had an issue with oil pressure and couldn’t make the call.

Big Congratulations to Brandon & Aaron and the entire Booher Racing Team on your win and new World Record!!!