One thing you can be sure of when watching the Throwdown in T-Town is a show that doesn’t let you down! With over 37,000 people in the stands and the pits filled wall to wall with hard pounding shootout cars, it’s epic!

This years Throwdown featured an unexpected match race between Scotty Palmer’s Top Fuel Dragster and Frankie Taylor’s Pro Mod, Fans went NUTS when they seen the two line up against each other! The crowd went wild when Palmer blew the tires off at the hit and Taylor clicked off yet another picture perfect 3.58 pass that he had been running all night! Most don’t realize that Taylor’s Pro Mod is FASTER to the 330′ with 60′ times in the .890’s and certainly more consistent than a Top Fueler! Hat’s off to the Scotty Palmer Team and the Stupid Fast Team of Taylor’s for an awesome match race! You know what they say, if you’re gonna pick a match race with a Top Fueler, better have a Chance 🙂 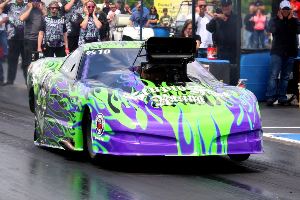 In more conventional racing action, Frankie Taylor and the Stupid Fast Racing Team took home the spoils of war in Outlaw Pro Mod. Frankie defeated Randell Reid in the final with a 3.584@213.54. While winning the race was awesome, you can bet this team had big grins on their faces all the way home with the knowledge they are the ONLY Pro Mod to Match Race AND BEAT a Top Fueler!!!

Congratulations to Frankie, Paul and the Stupid Fast Racing Team!!! 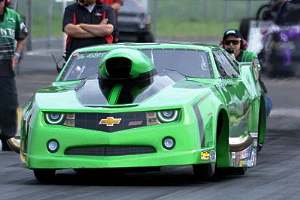 Bob Gulitti wheeling the New Tech Global Green Camaro took home the win in Legal Pro Mod. Bob defeated Darrell Reid in the final with a 4.087@179.54. Gulitti had the fastest passes in every round, with his best ET in Round 2 where he laid down a 4.029@182.82!

The NTG Team has been on a winning streak this spring with a NHRA Division win and another win down in Texas, looks like they’re off to a great start this year.

Brent Deputy from Reeds Spring, Missouri won the Pro Street class in his Black Trans Am by taking out Duane Bryant in the All NCRC final, Brent ran a 4.438@164.85 vs Bryant’s off pace 6.608@87 for a clear win.

Congratulations to Brent, Tammy and Team! 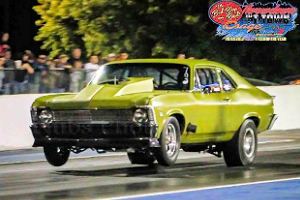 David Summerton took home the win for Team DFA in the MX275 Class with bracket like consistency and quick reactions, pass after pass with solid 4.90 performances. David defeated Missouri’s Jason Brown for the final round win with a 4.945@144.89.

Car owner Sam England made all the right calls resisting the urge to “TURN IT UP”, instead relying on going down track every pass, and it paid off big time for the Team every round. Team DFA made a lot of improvements over the winter and have came out with a big win right off the bat! Sam says there’s a lot more left in Mean Green, so hold on to your hats!

Congratulations David, Sam, Chris and the rest of the DFA Team on your 1st Win!!!