Wins Fourth in a Row in QRC Series and New Offical Record 4.003 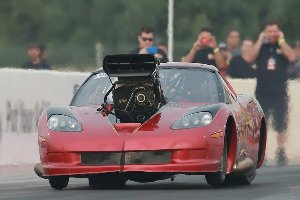 King Tut has done it once again with his 4th victory in the QRC Series February 7th.
He also reset the Outlaw 10.5 World Record again with a 4.003@192.63 blast during
the 3rd Round of Qualifying.

Todd defeated a red lighting Dave Hance in the final round to take the Al-Anabi Corvette to the winners circle once again! He has to be almost uncatchable now in the points series with only one more race to go, but we’re not real sure how the points system for this championship is setup, anyway you look at it and he has to be solidly in the lead.

Congratulations Todd on yet another win and breaking the record once again!