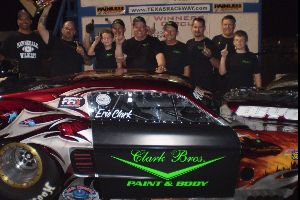 The Clark Brothers Racing Team has been on a winning streak here at the end of the season. Eric Clark won the Texas Auto ProMod race in Houston October 7th and set a new class record of 4.05! Then the Team repeated with their first TOPMA win on October 13th at Texas Raceway. Eric was #1 Qualifer with a 3.962@183 and defeated Tim Cruce in the final with a 4.003@183 over Cruce’s 4.267@170.

Next they worked on capturing a 3rd in a row by jumping in the rig and heading north to grab the final day of the Throwdown in T-Town which was on rain delay, but some broken bolts on the input shaft stopped them short in their winning streak. We all know how that kind of thing happens, but you guys gave it a shot and that’s what counts.

Congratulations to Eric, Scott and Team Dusty, Ken, Robert and Kevin (hope we got everyone) on the wins and new record!