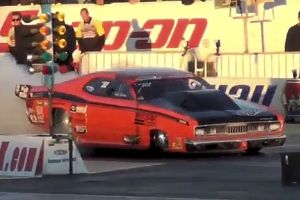 Todd Tutterow put down the fastest pass ever in Pro Mod at the Shakedown with a 5.98@262.49 MPH run which far exceeds the previous record held by Melanie Troxel of 258.71. “King Tut” was running the new Neal Chance All Billet Lockup Converter which helped him lay down a 67.5 MPH Backhalf!!.

What’s Todd say about the new Lock Up Converter? “Perfect – we’re going 270 soon!!!” He also told us that he had to peddle some on that pass, which certainly scrubbed a little off.

The Precision Turbo Duster is going to be a dominate force to reckon with and everyone can see the potential that is right around the corner. Todd had troubles in Round 2 which ended his day early, but we hear tell the scoreboards are still smoking after that record breaking pass! 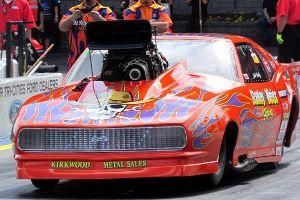 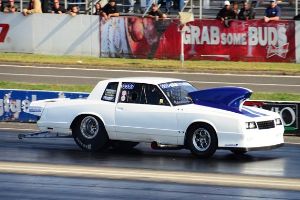 In Outlaw 10.5 Charlie Dolbin and Harold Caldwell set a new N2O record of 4.18 in competition, and backed it up with a 4.22. In the final Charlie shook the tires giving Rob Wells the advantage to take the win. TJ Kasper was also running very hard laying down another 4.08 this time at a paint blistering 201.25 MPH – Congratulations to TJ, Tom and Gil Christy Motorsports on backing up Outlaw 10.5 Record and a new MPH Class record!

We’re glad to Richard Sexton and Gil Mobley got the GTO repaired and back in action! The team isn’t quite back up to speed, but after a nasty wreck we’re sure there are a few things to work out and we’re glad they are back! 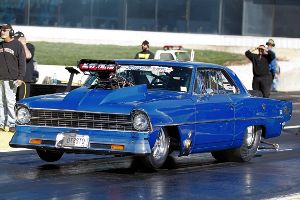 In Heavy Street Tony Presto made the long haul down from Canada and was rewarded with a co-win along with Mitch George driving Jack Boer’s Monte Carlo. Due to an early curfew at the track, the final wasn’t actually ran so the “all NCRC” final round couldn’t be ran. Presto & George split the win and took home $5000 each.