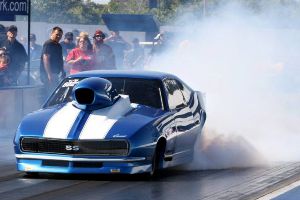 We don’t often overlook World Records, but we missed Barry Daniluk’s latest record breaking pass he recorded while running Top Sportsman at Baytown, Texas during the ADRL Season Finals back in October. Barry ran a 4.03@177 with a .962 60′ at this race, making his car the fastest Naturally Aspirated Doorslammer in the World!

Barry qualified #1 at this race (N/A) among a field of power adder cars with a 4.081@176.70 – that isn’t easy at a Top Sportsman race, let alone an ADRL Top Sportsman race. He want on to round two in eliminations but ET’s fell off at the wrong time ending his run early. You can bet he had the Nitrous Guys shaking their heads in the pits when those 4.0 passes were going up on the board!

Congratulations Barry on doing what they say can’t be done!!!