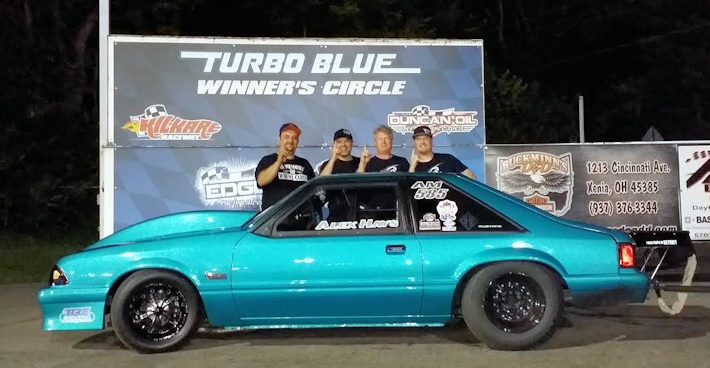 Alex Hays from Canton, Michigan used to run solely the Milan All Motor Class, but recently decided to try his luck in the new Ultra Street Class and make the switch to some radials. Alex & Team traveled to Xenia, Ohio to run at Kilkare Raceway with the Xtreme Outlaw Series on August 8th.

Despite it being his first time racing in Ultra Street, Alex qualified #1 with a 5.02, then went into eliminations laying down bracket like 5.0X passes all night long. That consistency did the trick to take home the team’s first win over Jason McGrane in the final where he laid down a 4.99@139.77!

Hay’s Mustang is powered by a 585 ci Big Block Chevy with single carb, a Rossler 3 speed 400 and a NCRC All Billet Converter put the power to the ground.

Congratulations on your first Ultra Street Win Alex and Team!!!