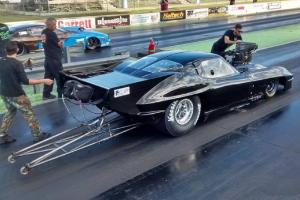 Doug Horween took home his first win of the 2015 racing season at the SHRA Southern Thunder Nationals at Orlando February 7th. Even though their team had only planned on making some test passes, they went ahead and entered the race and did pretty darn good for first time back out. Doug qualified #5 then took out Kevin Fiscus in the finals for the race win!

Way to go Doug, Aaron and Team Horween on your first win of the season!