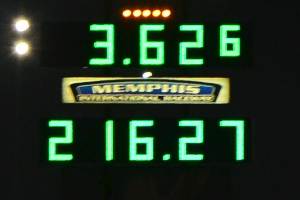 Joey Martin wheeled the Low Mad to a New World Record MPH at the ADRL Race in Memphis August 2nd during the 2nd round of qualifying. On his 3.626 pass which was a very solid run, the 55 Wagon put up a 216.27 MPH on the scoreboards – the fastest run ever by a doorslamer! Martin, as well as everyone else was suspicous, was it a fluke or what?

Well it wasn’t a fluke, during the 1st round of eliminations when he raced teammate Brandon Snider, Martin backed it up. Snider went 3.650@207.46, and Martin went 3.626 at 215.55 making it official!!! Martin, who wouldn’t make a claim of a candy wrapper pass, said it shows it on the data logger also, the car was moving harder than ever before on the back half on both runs!

Joey lost to Bubba Stanton in Round 3 of eliminations when the car made a move and got out of the groove ending the weekend early for the Low Mad Team. But you can bet the ADRL Pro Extreme Points leader will be back in the lanes at the next race ready to do battle.

Congratulations to Joey and the LowMad Team on the new Fastest Doorslammer World Record!!

Check out this video and hear the announcer’s go nuts when he sets the record!