Just one week since Chuck Ulsch and the Mobley Motorsports Team broke the Outlaw 10.5 Record at Cecil, Ulsch and Teammate Mike Decker driving the Decker Salvage Car traded the record back and forth at Capital Raceway October 18th! 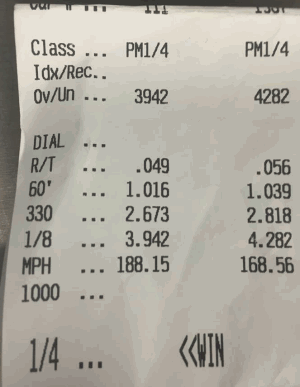 After the 3rd Round of eliminations Decker & Ulsch were on the way to the finals, but curfew hit and they were not able to finish the race, however both Mobley Motorsports Team Members broke the record yet again. Mike Decker we believe has the “Official” record as he backed up his 3.956@195.51 and with a 3.957, Ulsch ran a 3.942 but wasn’t able to back it up, so he holds the “Unofficial” record – regardless both belong to Team Mobley which is a win-win in our book!