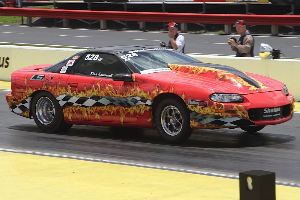 Kevin Rounsavall broke the NMCA LSX Real Street Record in Bowling Green and became the first in the class into the 7 second zone! Kevin ran a 7.994@@172.60 at the at Muscle Car Nationals in Norwalk, Ohio in his 1999 Camaro. Rounsavall, the 2013 Class Champion and record holder, was unbeaten during the 2013 season with his 440 LSX Powered Camaro built by Shahan Performance in Cabot, Arkansas.

This year he’s running a very close second in points and can very likely get enough to win another championship at the season final in Indy.

Congrat’s on your record breaking pass and good luck in Indy Kevin!