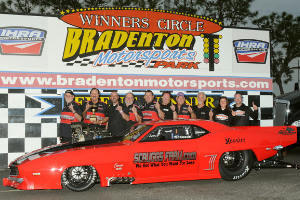 If the 1st race of the season for these cars is any indication, PDRA Pro Extreme is going to be off the hook this year! At Bradenton’s US Nationals PDRA Champion Jason Scruggs and Frankie “The Madman” Taylor put on quite a show in the final round laying down some impressive ET’s. Scruggs went 3.546@218.18 with a .011 light to take the win, and Taylor went 3.558@213.01 with an .008 light to land him a close Runner Up position.

Congratulations to Jason Scruggs and the ScruggsFarm.com Team and to Frankie & Paul Taylor on the Runner Up! 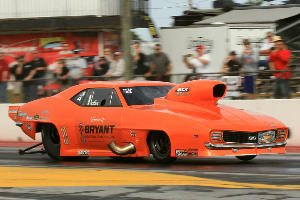 Jay Cox started his team’s racing season off with a bang by capturing the win in Pro Nitrous at Bradenton. #1 qualifier Cox faced #3 qualifier Travis “The Carolina Kid” Harvey in the “All NCRC” final round that turned out to be a very close race. Harvey ran a 3.775@200.89 which wasn’t quite enough to reel in Cox who ran 3.763@198.67 to take the win.

Congratulations to Jay Cox and the Bryant Racing Team on the win and to Travis Harvey and Team on the runner up!!! 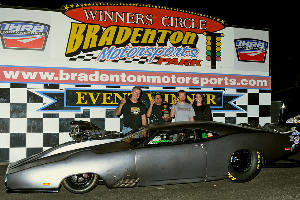 Chip King put his Super Swoopy Dodge into the winners circle at Bradenton, it wasn’t pretty but it was a win. Both Chip and his competition Frank Cersosimo red lighted, but Chip got the win with his light being the better of the two. We’re not sure if Frank LB3A’d, or broke, but he received a foul and King went 3.866@195.01.

Congrat’s Chip and Team on your 1st Win of the Season!!! 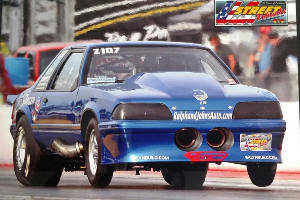 The US Nationals was the location for the first ever Limited Drag Radial Class, and we’re pleased to announce that Mustang Mike Modeste took home the win at this historic event. Mike defeated Scott Husted in the final with a 4.243@171.39 to Husted’s 4.411@175.57. That final round also was also Mike’s fastest pass resulting in Low ET for the event, and establishing a new class benchmark.