Frankie Taylor does it again, he was first to the 50’s, now in 2014 he had landed another World Record in Pro Extreme. Taylor laid down an amazing 3.485@216.97 during qualifying at Rockingham – the 1st to the 40’s!!! That pass of course put in the #1 position, but unfortunately Taylor got out of shape 1st round against Team DDR’s Anthony DiSomma who made it to the Semis. Both cars had tons of potential to go to the finals, but not at this race.

Bubba Stanton, took home the win in Pro Extreme with his NXS equipped new Bickel Built 69 Camaro after qualifying #2 with a 3.514@218.94. He defeated Snyder in the final to take home the 1st win at a PDRA event!

Todd Martin also running a NCRC NXS Billet Converter made his 1st pass in the 50’s as well at Rockingham, Todd ran a 3.567@207.30 which put him in the #3 qualifying position. He later defeated Eric Dillard on a hole shot but got defeated by Bubba Stanton later in eliminations.

Big Congratulations to Frankie Mad Man Taylor on your new WORLD RECORD and FIRST TO THE 40’s!! Bubba Stanton on his win!! Hat’s off to Todd Martin on his new PB! also to Team DDR and to Anthony DiSomma who made it to the Semis.

We also want to give a shout out to Neal Wantye and Joey Martin did well with their new cars that Joey built over the winter, keep an eye on those cars they are going to be going rounds very soon! 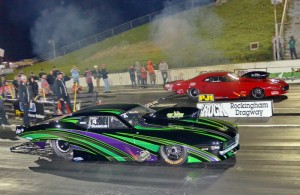 Jason Harris took home the win in Pro Nitrous with his 903ci Pat Musi Powered, Neal Chance Lockup equipped 68 Firebird. Jason qualified #1 with a 3.801@200.5 MPH! He bettered that pass in the 1st round laying down a 3.783@200.50 prior to defeating Tommy Frankin in an All NCRC Final Round. Harris got off the line first in that battle, running a new PB of 3.770@200.89 and Franklin laid down an equally impressive 3.793@197.83. Both cars Pat Musi powered and equipped with the only converter to go 200, the NCRC Billet Lockup Converter An interesting note about the converter in Harris’s car, it has over 150 passes on the lockup clutches and still going strong!

Lizzy Musi also broke the 200 mph barrier with her Pro Nitrous Entry and took her car all the way to the Semi’s.

Sure looks like these racers are on to something with those 200 MPH blasts with an AUTOMATIC! Watch out clutch cars!!!

Congratulations to Jason on the Win and Tommy on the R/U!!! 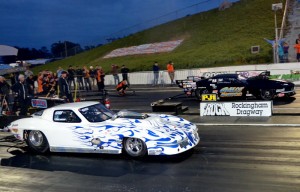 King Tut is BACK – Todd Tutterow is back in the winners circle at Rockingham, he qualified #1 with a 3.813@194.69 then defeated Turbo Todd Moyer in an all NCRC Final which was a slug fest of a race. Tutterow went 4.071 pedaling all over the track to Moyer’s wheel standing 4.244 pass.

Congratulations to Todd Tutterow and Team Galot on the win and to Todd Moyer and Team on the Runner Up!!