Jason Michalak put his brand new blown drag radial Corvette into the winners circle at the inaugural Radial Tire Racing Association race at Northstar Dragway. Not only did the Bad9er team win, they consistently laid down 4.0X passes throughout eliminations making him one tough Ombre to beat. Not bad for the second race out on the new car and combination!

Congratulations Jason & Dream Team Members Billy Stocklin and Frankie Taylor on your big win, and to Kyle on the R/U!!! 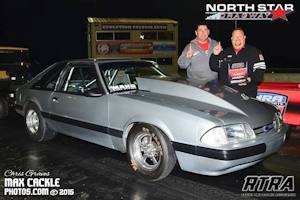 We also want to congratulate Rick Thornton / Fast Forward Innovations & Team G-Mac who ran a very stout 4.05@190 at this race.